About the Meeting Room

The Meeting Room, the new park installation in Queen Anne Square, was commissioned by the Queen Anne Square Maintenance Trust, an offshoot of the Newport Restoration Foundation, and designed by artist Maya Lin in collaboration with Edwina von Gal (landscape designer) and Nick Benson (stone carver, calligrapher) of the John Stevens Shop. The title of which conveys the intent: to create spaces that invite a spirit of gathering and community and to provide a place of quiet imagination in the midst of the city. The park design centers on three stacked stone foundations, which represent actual locations and footprints of buildings which existed on the site during three different centuries: 1777, 1876, and 1907.Together they form a series of outdoor rooms in varying sizes, each with its own “voice” centered on history, community, home, hearth and industry. The entrances to each space are laid with threshold stones, hand carved with mallet and chisel, excerpts from a diary or ledger of the era, in calligraphy that is historically consistent. The foundation walls, a balance of history and modernity, create an evocative connection to the past, yet are firmly rooted in the present. They are of seating height to encourage gathering, lingering, and occasional entertainment, which is further enhanced by free wi-fi and a park web page that gives an in depth history of the site.

The Foundation Room is the largest of the foundations and contains the key element in the park: a solid granite water table, inscribed by hand in a text specially designed by the John Stevens shop, with a key excerpt from the Royal Charter of 1663. The first of its kind in the Colonies, it guarantees religious liberty and invites an open society. The water table, celebrating the 350th anniversary of the charter, has 9 holes which gently bubble water from an invisible “spring”, representing the number of original founding families and the essential role that springs played in an early settlement. The threshold texts focus on building, to honor the legacy of Doris Duke and The Newport Restoration Foundation and their commitment to preserving the historic buildings of Newport.

The Long Room’s inscriptions speak of community and industry: farming and sailing in Baskerville lowercase Roman. The texts are from the early part of the 19th century. The tree is a Platanus acerifolia, or London Plane, a popular street tree in England and Europe, brought along by the early settlers to remind them of home.

The tree in the “Foundation Room” is a Sophora japonica, or Chinese Scholar tree. It was commonly brought back from Asian voyages by sailing captains, and very old specimens can be found in many of New England’s seaport towns.
The Hearth, which contains an accurate replica of period fireplace and chimney, has passages from everyday domestic life, which are inscribed in the italic style of the 1800’s.

Other trees throughout the park, (Oaks, Elms and maples) are native, chosen for their hardiness in urban conditions, excellent shade and fall color, and low maintenance requirements. For a spectacular show in early spring, and in memory of both Doris Duke and the early Newport residents who loved them, a grove of Magnolia soulangiana (saucer magnolia) drifts across the park.

The park is designed for maximum sustainability. Each foundation room is paved with stones reclaimed from Newport’s old bluestone sidewalks and the seating wall along Thames Street consists of granite blocks saved from the demolition of an outdated bridge. The historic Newport gas light fixtures have been custom fitted to meet Dark Sky standards with energy efficient LED lamps that mimic the color of gas lamps, at safe light levels. The park will be maintained with a minimum of irrigation and without toxins. 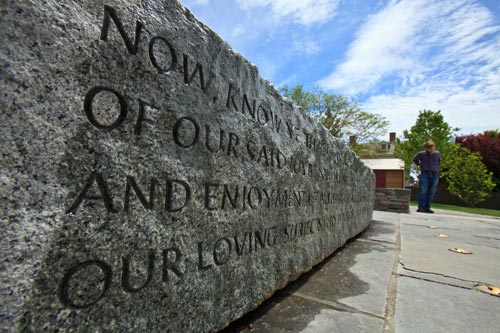 The Foundation Room
“To Turning the arch, to the overplush of ye plastering, to laying five harthes”
John Stevens, 1726 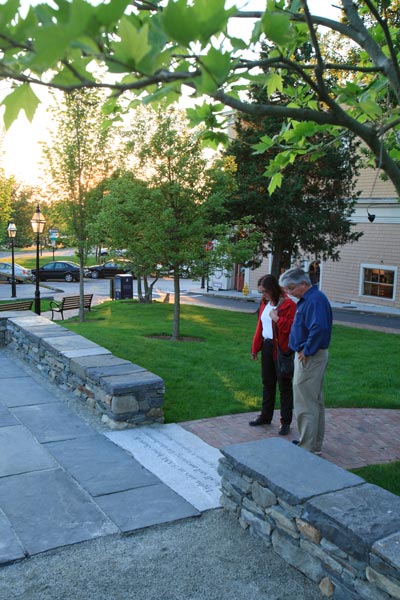 The Long Room
“Light airs at 5AM, hove short & made all sail awaiting for the breeze”
Henry A. Brightman, 1860 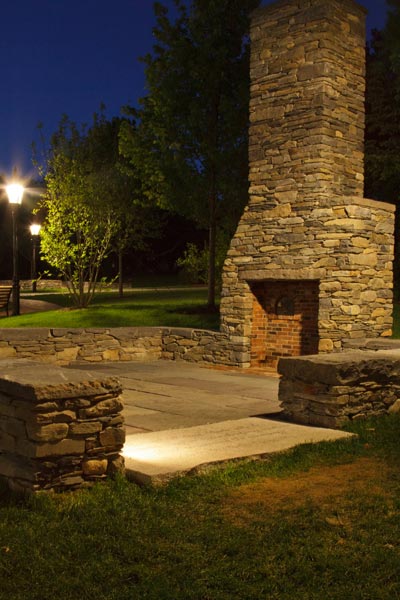 The Hearth
“Rained all day. Made jelly & did various other Housekeeping matters which consumed the Morning”
Fanny Clarke, 1876 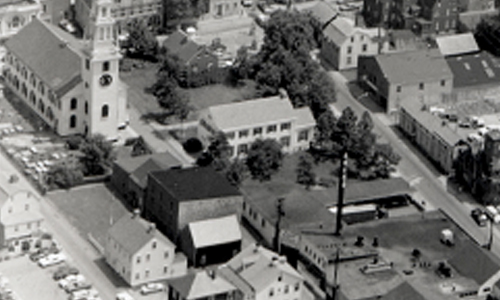 By the early 1970s, the area now known as Queen Anne Square was a downtown urban space filled with a wide variety of buildings which were mostly commercial, and many of which were of little note. Some of these structures were largely abandoned. Within the boundaries of the block lay historic Trinity Church, almost completely hidden by the surrounding commercial development. In essence the area had always been a dense urban place even as early as the mid-18th-century. Its appearance by the 70s was oddly misused, compared with its long history of commercial vitality in the heart of the city… 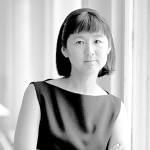 Artist and Designer of The Meeting Room

I am excited and honored to be creating a work at the center of historic Newport. My interest in time, memory and history originally drew me to learn about the rich history of this area and discover the structures that once existed at this site. To be able to create a landscape that reveals the historic aspect of Queen Anne Square in which these physical structures, some of which have stood here for 300 years, hold the history of the people who lived and worked there through time, is an important aspect to me and the project. The design is about sharing these spaces with the public. The foundations are created from reclaimed stones that were once part of historic homes. In doing so, we are building foundations that represent home, family and community through history. I imagine it to be a place where people gather together and also can reflect upon how Doris Duke helped preserve so many of these significant historic houses.